Tournament organizers now have the opportunity to receive sponsored community prizing for Shadowverse directly from Cygames, the developer of the game.

We’re excited to partner with Cygames as their exclusive tournament platform for International Community Prizing (excluding North Asia). The Shadowverse community now has a platform that has consistent events and prizing.

What exactly is the prizing? Here’s a snazzy graphic with the breakdown of how many Vials the top 4 players of a tournament could win, based on the number of participants. 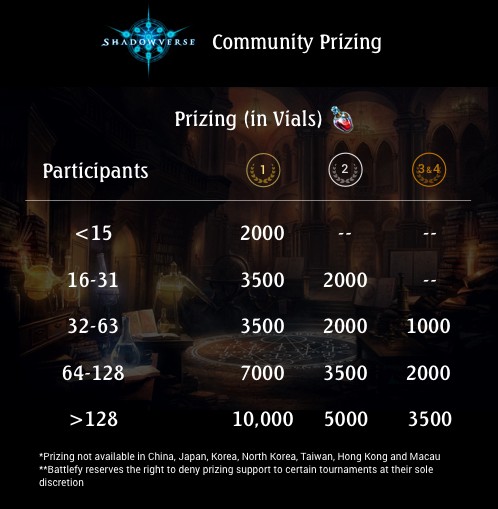 The more participants, the larger the prize pool. For players, the registration process is the same as joining any other tournament on Battlefy — and if you end up placing in a prized event, you’re likely to receive in-game prizing from Cygames. Awesome, right?

If you’re a Shadowverse tournament organizer who wants to qualify for community prizing, the 3 step process is the following:

You’ll be reminded of these steps immediately after you’ve chosen to create a Shadowverse tournament, as seen in the screenshot below. 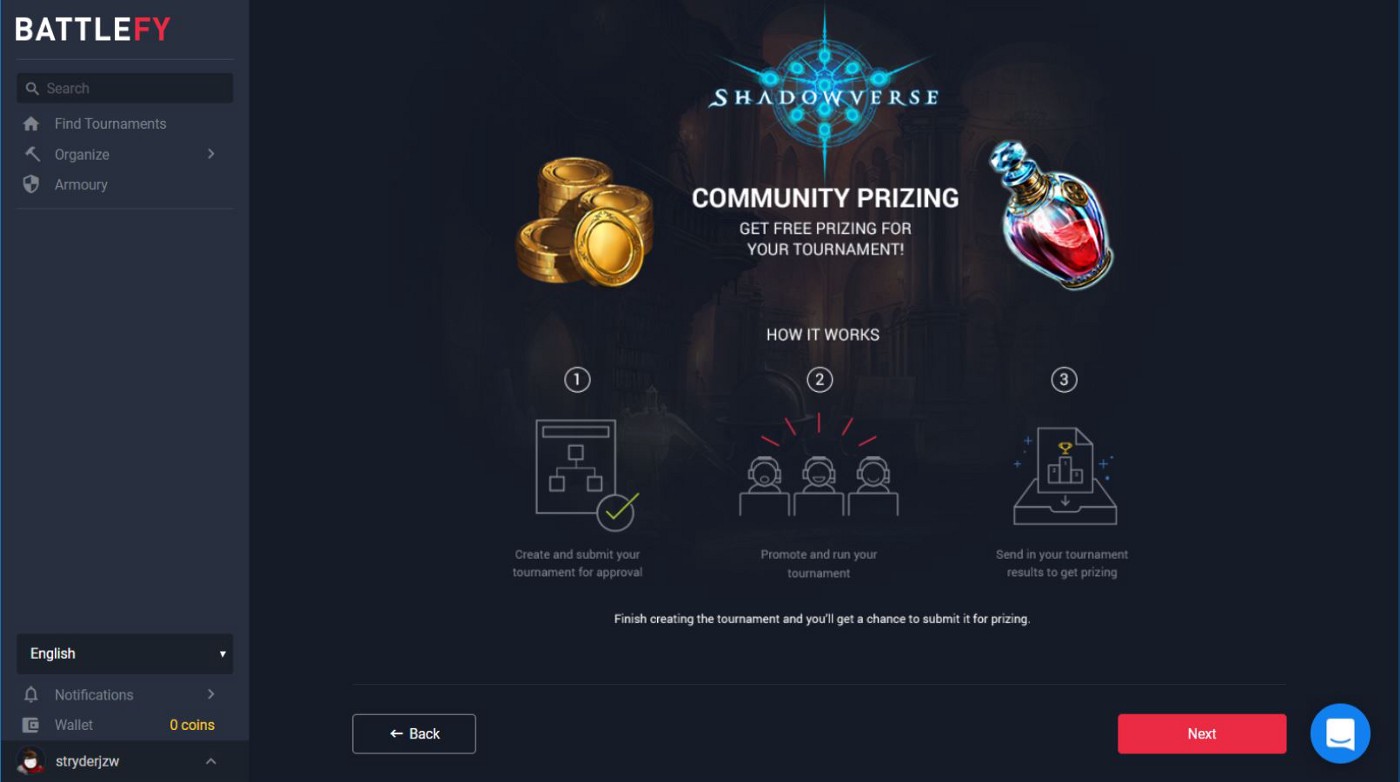 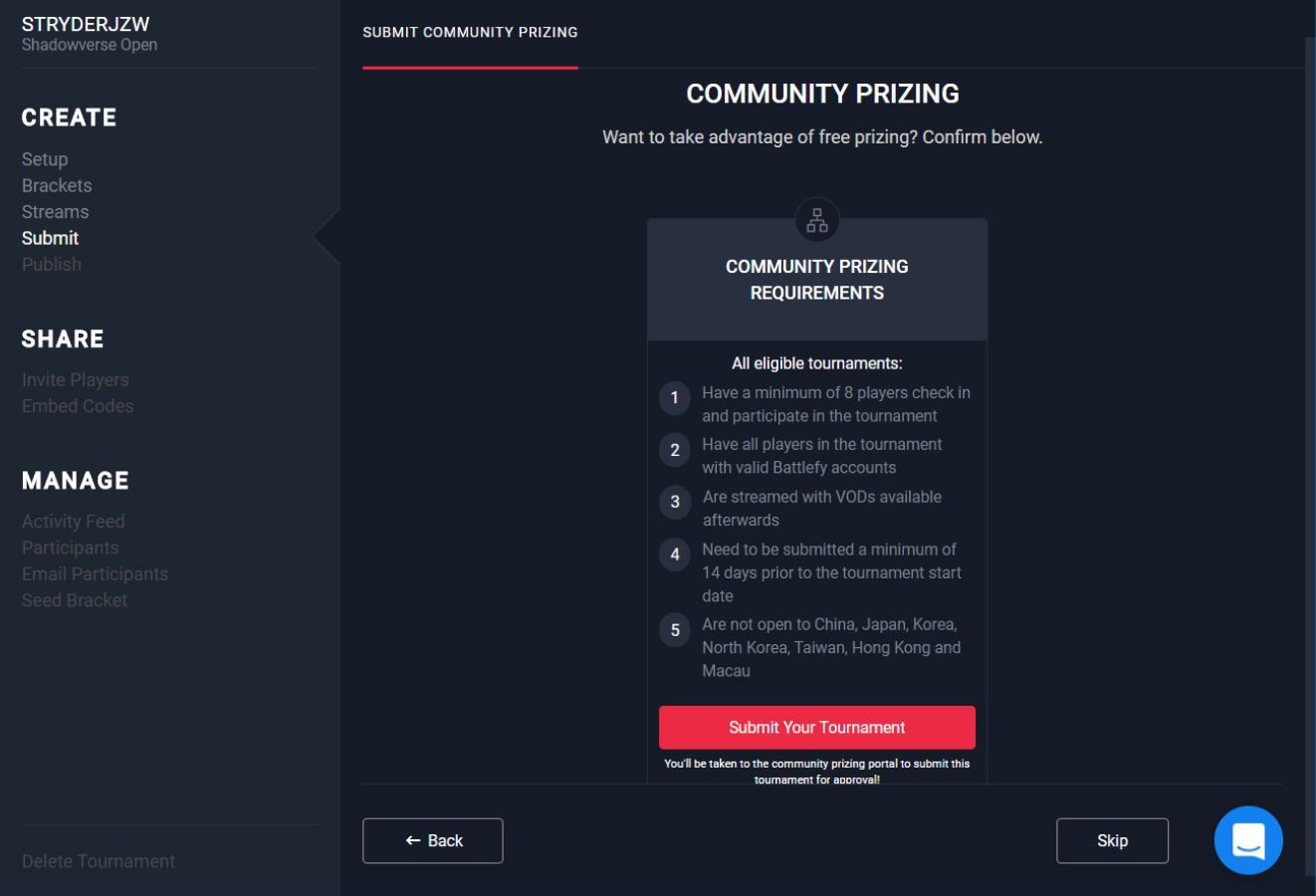 Once you click “Submit Your Tournament,” you’ll be taken to the Community Prizing portal to review your submission and officially submit it for approval to receive free prizing!

As you can see from the Community Prizing Portal below, you’ll find the details of your tournament, including whether or not you’ve submitted it too late for approval, and a place to add where the tournament is being streamed. 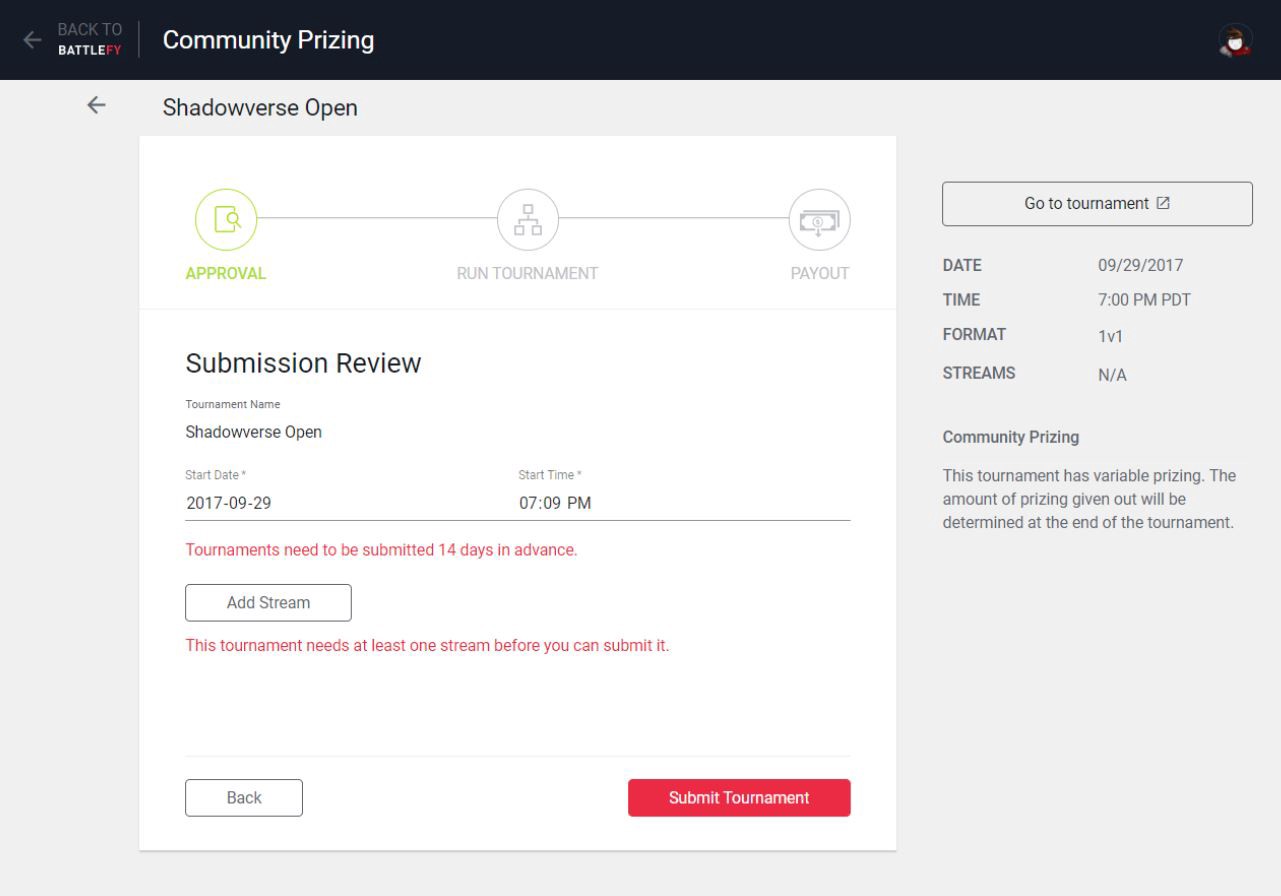 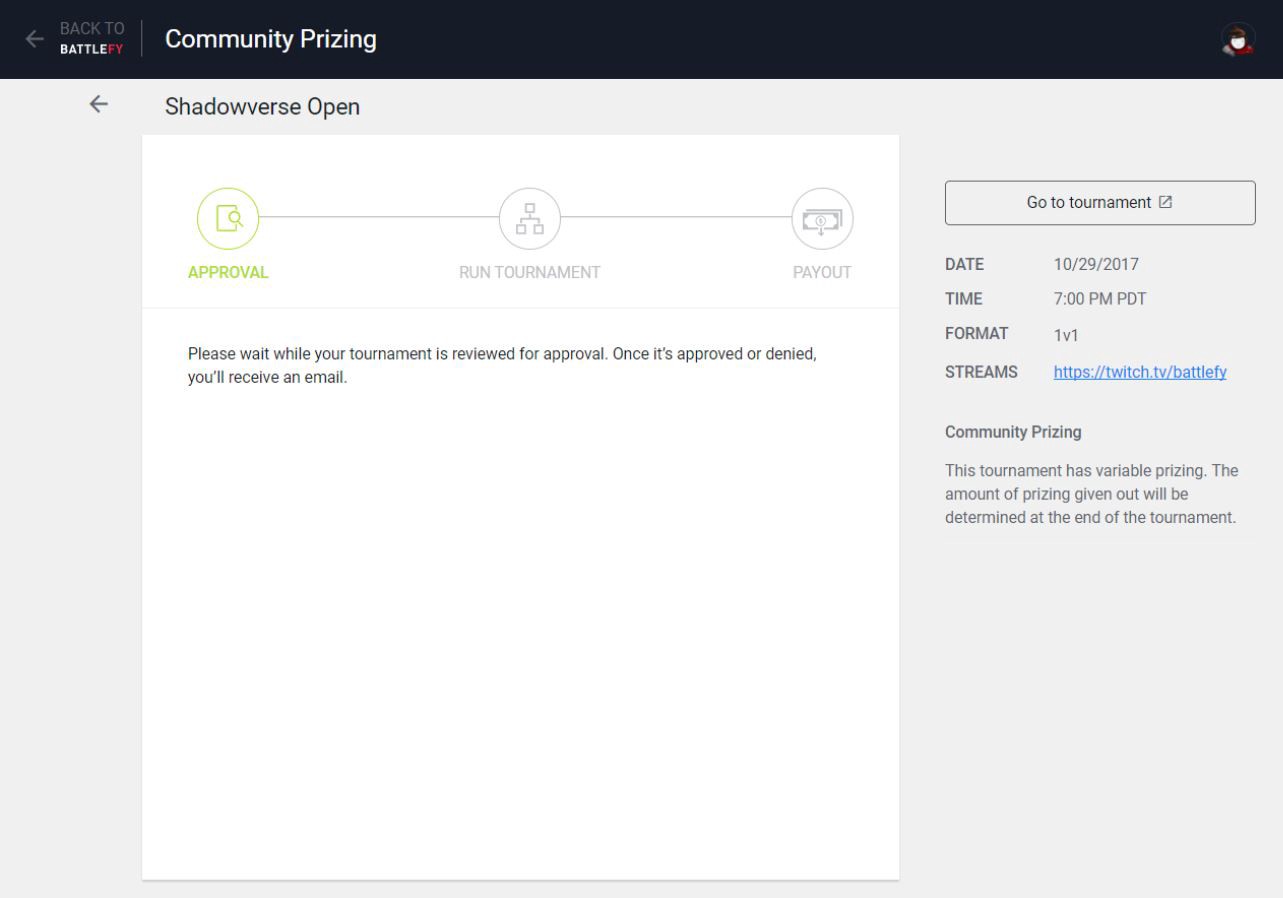 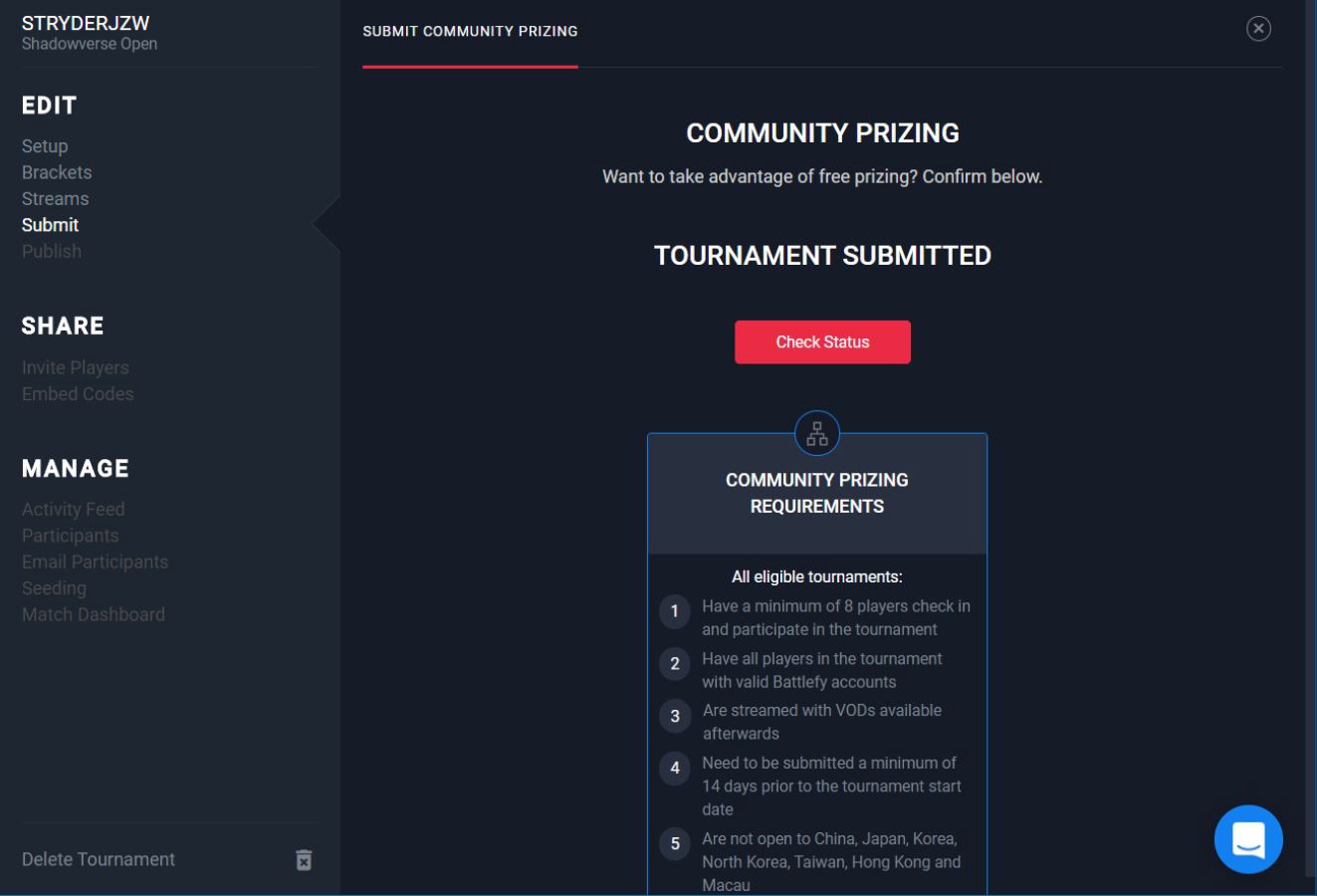 Assuming your tournament finished and successfully met the eligibility requirements, you’ll then be ready for Step 3: sending in your tournament results to get prizing — which is all done back in the Community Prizing portal.

The most important part of sending in your information is listing the winners of the tournament. This way, Cygames knows which player to give in-game prizing to and how much. 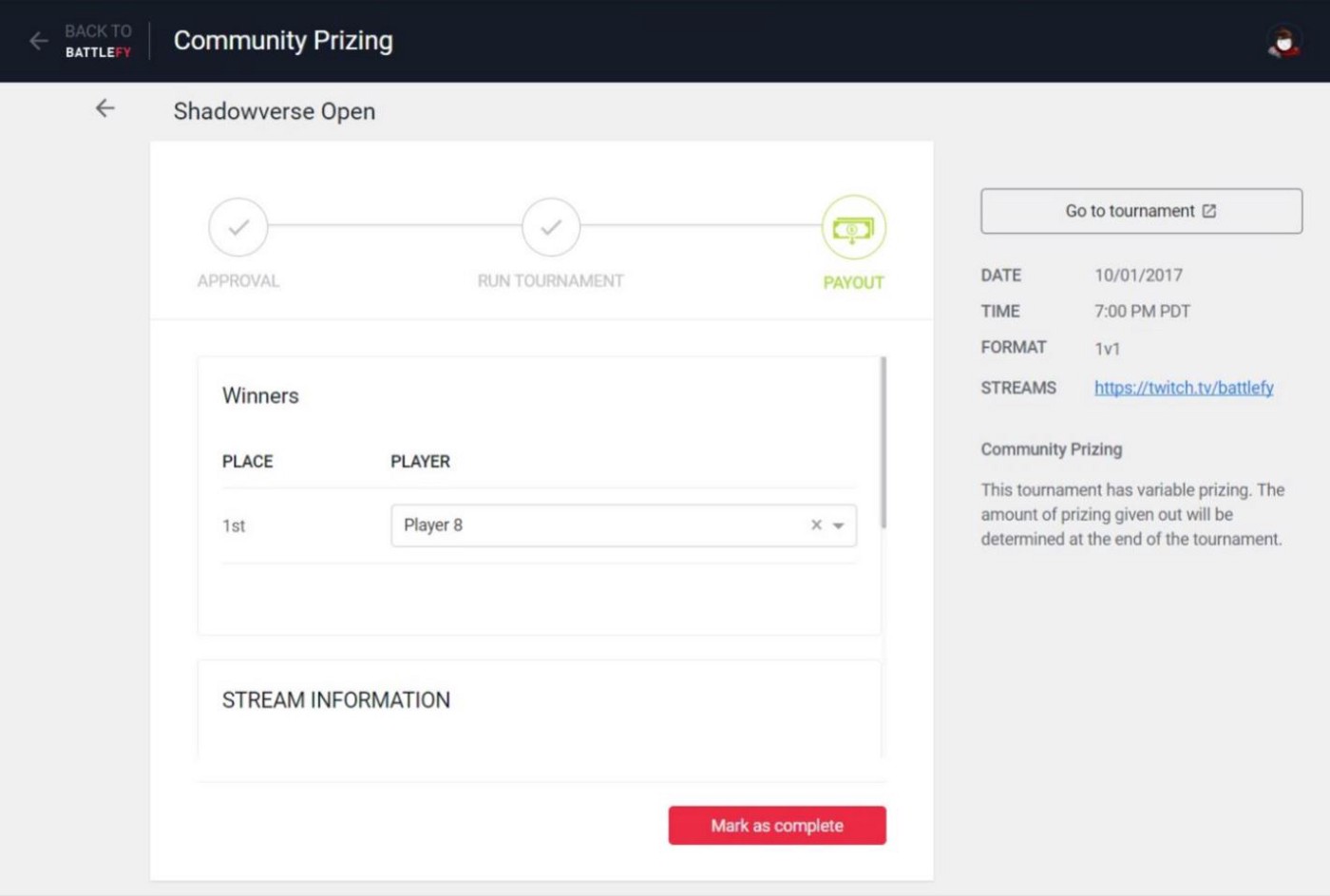 You also will need to fill out information from the stream of the event and click “Mark as complete” for your tournament results to be officially submitted. 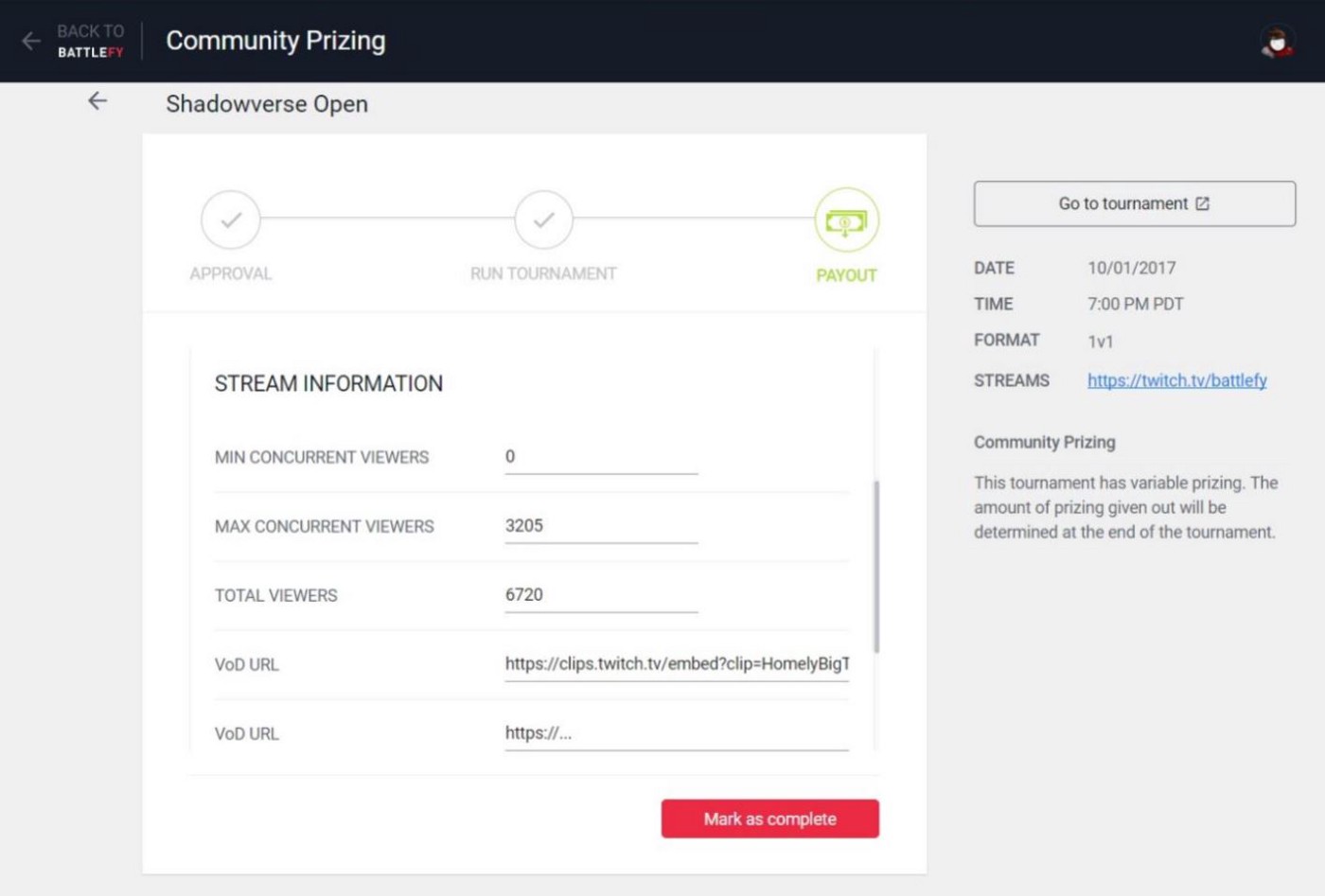 Cygames then receives the information of each player who won prizing from your event, and appropriately rewards them in-game. Then, it’s on to the next one!

Are you ready to run an officially prized Shadowverse event!? Get after it!

Have any questions? Email us and we’ll do our best to answer them.

This section lists specific rules on organizing a Shadowverse tournament with Community Prizing.

Welcome Colton to the Battlefy team!
October 2nd 2017
Ask @Battlefy: why did you choose MongoDB as your primary data store?
October 9th 2017